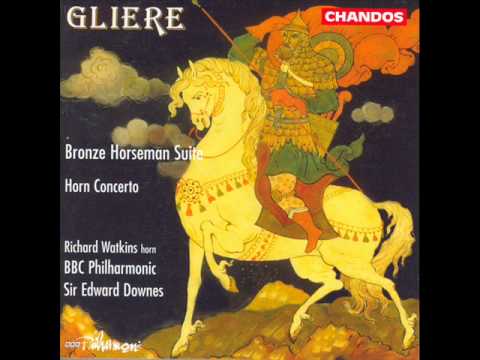 With the addition of valves in the early part of the nineteenth century, the French horn suddenly evolved from the cumbersome, bugle-like accompanist it had been to a fully capable, full range solo instrument.

Written for Valeri Polekh, the solo horn player at the Bolshoihis Concerto in B flat is unprecedented in both length and difficulty. Long at nearly 24 minutes and constructed without regard for the natural conveniences of the horn itself, it was inspired by and modeled after the barbarically difficult Tchaikovsky violin concerto. Nearly as long as the other two movements combined, the first movement allegro begins with an orchestral tutti which brings on the soloist, who launches into a bright, singing theme.

Although not complex, the movement provides for a cadenza which bridges to a more complicated second theme. The movement ends with an orchestral reprise of the tutti opening and without the horn itself.

The second-movement andante sounds deceptively simple, but in it may be heard the chromatic complexity of the valved horn and the demands on the player are considerable.

The movement ends on a sustained, muted high E flat. The chromatic and dynamic demands on the player become greater and greater and at last a great, headlong, triple-tongued rush sweeps to the conclusion.

Concerto for horn & orchestra in B flat major, Op. 91

From Moscow with Love. Romances for Double Bass.